The son of a Swiss Lawyer from Basel, Mario was always considered a dreamer and adventurer. His early years at art school in Florence ignited a deep love for Tuscany, which would never leave him. While he was to follow in his father’s footsteps in Law, halfway through his studies he realized they were right, he was a dreamer! He headed straight to California, working as a ski instructor and followed his passion for adventure and freedom. This passion led him to become a pilot and guided him via Central Africa, India and Nepal to Haiti, where he flew Cargo for Haiti Air Inter. The art and character of the Haitian people enthralled him and he spent nearly 5 years in Haiti, working closely with several master painters there whose works can now be seen on 4 Terralsole wine labels. After the birth of his first son, Mario decided he should get serious and moved back to San Francisco to start a Tour and Travel business. Though highly successful, he felt a strong longing to follow his dream to live in Tuscany and immerse his senses in its beauty.  He bought an old farmhouse in Montalcino and while working as an artist, he familiarized himself in the local wine: Brunello di Montalcino. This was the beginning of his first winery; Il Palazzone and in 1996 he broke ground on his ultimate dream, TERRALSOLE. 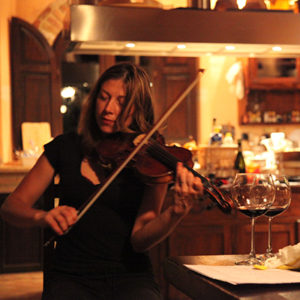 Athena is Californian with a strong belief in living life the natural way. Fourth generation San Franciscan, she grew up with a close view of Napa Valley’s vineyards and took an early interest in wine. A professional musician, Athena tours the world as a successful Irish fiddle player. On one of her trips she met Mario in Montalcino and fell in love with him, Tuscany, and with Terralsole. While working closely with Mario at the winery and raising their two young daughters, Athena also tours extensively with her musical group The Green Fields of America and as a soloist with the Dublin Philharmonic Orchestra. As the saying goes: “Behind every great wine is a great woman”.
Website : www.athena.cd