MONTALCINO – Unique in the Wine World 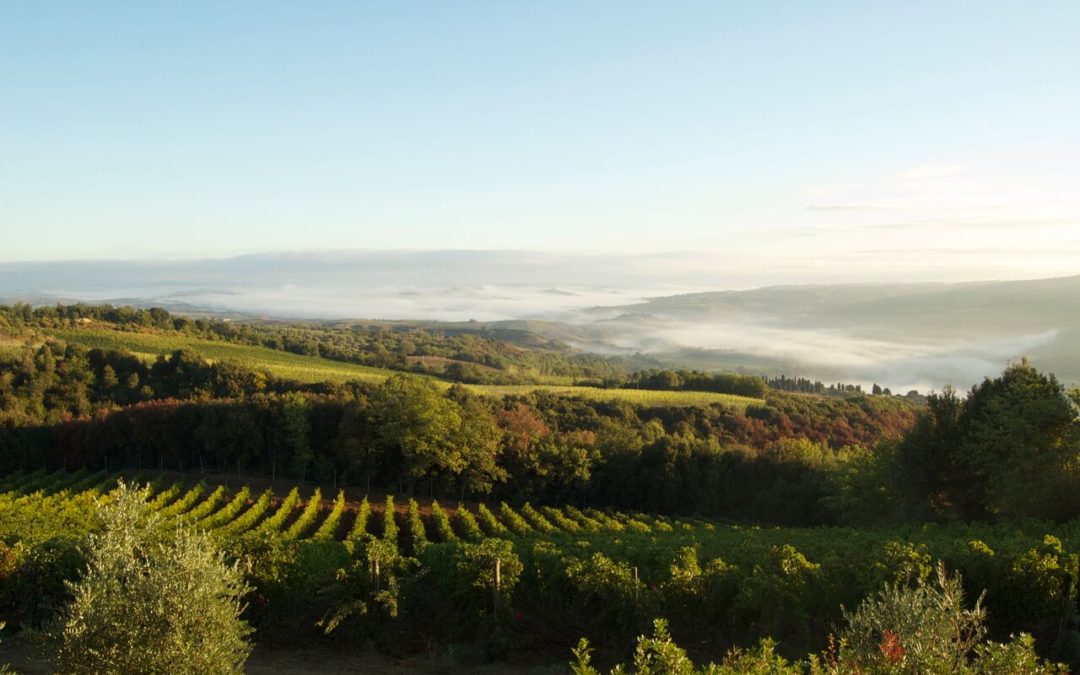 Ever wonder why Montalcino’s wines are world famous and why Sangiovese that’s grown here is unlike any where else? Kerin O’Keefe, in her book Brunello di Montalcino, observes that: “Montalcino’s growing zone boasts one of the most complex and varied soil profiles in the world.”Millions of years ago, nearly all of Italy was underwater and sea levels were as much as 25 meters higher than today. Tuscany was covered by a warm and shallow sea, with Montalcino emerging as an island. Driving through the landscape of the township, it is easy to imagine, if one has some experience in scuba diving, the underwater contours of the ancient seas.The hill of the town itself was formed in various geological eras. During the last 2-5 million years, the oceans receded and returned several times, creating a unique and varied soil mix throughout the area – no other wine region in the world has soils like this. In the highest parts of the zone closest to the town where the land first emerged from sea, there are alberese soils, composed of a mixture of stone, sand and limestone. In the lowest parts of the denomination, traveling southwest towards Grosseto and the sea, the soils are the most recent, composed of clay, marine and alluvial deposits and some galestro (schist: clay/shale mix of soil).  In the middle elevations, the effects of the movements of the ancient seas are most apparent. Researcher Edoardo Costantini, explains the complexity of these soils: “Usually, land protruded from the sea when the oceans receded, and that was it – end of story. What era the oceans receded in helps define a given area’s geological and pedological composition. But in Montalcino, our research demonstrates that the oceans came back again and reclaimed the newly uncovered land masses up to the middle altitudes, roughly 300 to 350 meters above sea level before receding yet again, and that this phenomenon repeated itself several times.”In the course of these movements of the seas, huge landslide,s that can hardly be imagined now, displaced millions of tons of soil from the highest parts of the hill to the mid-range altitudes. The result was the combination of the oldest soils, mixed in with marine sediments, which is only found in the middle areas of the Montalcino mountain. The lowest altitudes which contained the sea bottom did not benefit from this colossal mix of complex soils caused by the massive slides. In fact, the Montalcino vine cultivation area has significantly stonier soil than much of the rest of the growing areas in Tuscany.

The range of soils in the denomination is considerable and neighboring plots can differ widely. In Castelnuovo dell’Abate, one producer has adjoining vineyards that harvest a week apart due only to the soil differences. Many producers harvest and vinify their plots separately to keep these grapes from different soils apart. One large estate, has documented 29 different samples on its property in the southwest of the growing zone. It is one of the reasons that sub-zones can be a complicated project when one producer can have a considerable variety of soils in just a small area of a few hectares. The soil composition at certain altitudes can make a wine-changing difference. The warm ancient seas contained a plethora of marine life that still leaves many traces today, adding to the complexity of the soils. In fact, in 2007, a Pliocene era whale skeleton dating back five million years was unearthed in vineyards located in the southwest after the nearby discovery of fossilized shark teeth. On the north side of Montalcino on the hill of Montosoli, one family has an entire collection of marine fossils discovered in their vineyards on display in their tasting room for visitors to see to underscore the importance of the soils on this particular site. But it is the oldest soils which give the magical combination necessary to grow great Sangiovese – thin soil to keep the yield low and restrain the natural exuberance of the vine, rocky to provide good drainage and a high mineral content to give depth and complexity.  Terralsole is located just a few kilometers south of the town of Montalcino, on the road to Castelnuovo dell’Abate. The areas here have the oldest and complex soils, making them most suitable for growing Sangiovese.. Altitudes range from 350-550 meters above sea level, giving the wines a relatively high acidity which is a key component for longevity. While soils of this age are usually quite poor, here they have a very high mineral content, lending a complexity to the palate. The diurnal differences in temperature promote a slow ripening of the grapes which is essential for developing all the scents on the nose. In exceptionally hot years, like 2003 and 2017, the cooler temperatures of the higher altitudes keep the wines fresh. Try a few of Terralsole’s single vineyard Brunellos to see the difference that Montalcino’s soils might make in the bottle and on your palate.

This site uses Akismet to reduce spam. Learn how your comment data is processed.